It’s now over three weeks since I started my “Read what I Own” resolution- challenge (the outlines of which can be found here). Since explaining what I was planning to do, I’ve had some odd reactions on the old social media. 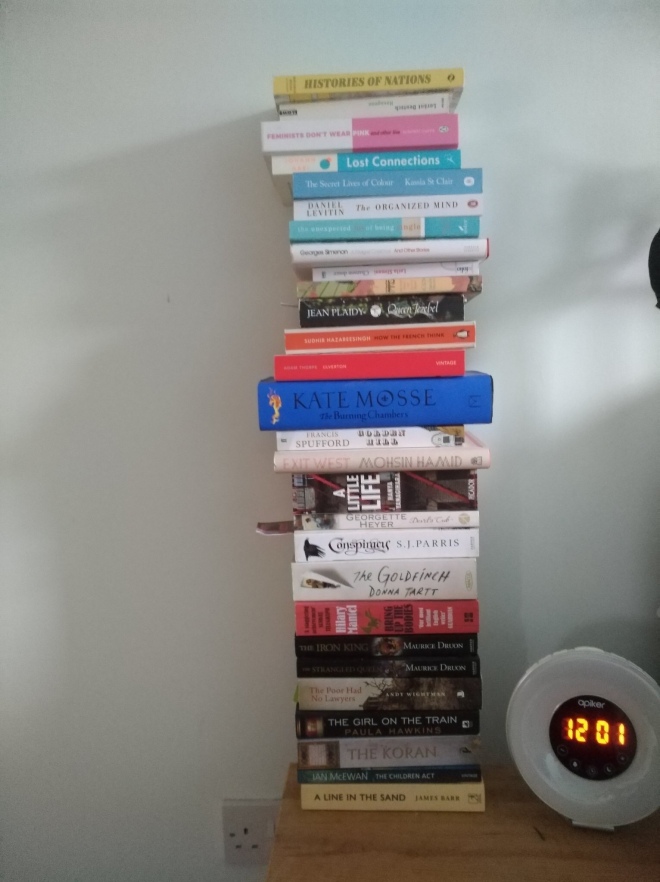 END_OF_DOCUMENT_TOKEN_TO_BE_REPLACED

No, I really, really love books.

One of my earliest memories is of sitting on the floor of our kitchen in Edinburgh, “reading” my mum’s cookbooks. When I went to nursery, my mum got a ticking off, because I could already read, but I had not learned in whatever way it was that was approved in the early 1980s. Thankfully, she ignored the ticking off and both my parents (and my wider family) encouraged me to read through my childhood and teenage years.

END_OF_DOCUMENT_TOKEN_TO_BE_REPLACED

It has been a long time since I blogged here, for many reasons. I have various writing deadlines, I am trying to develop future projects to the point where I can submit them to funding competitions, I have a number of professional projects that I want to see through at Leeds which have taken up my time. Plus I had a full teaching load and a demanding admin role this year. This is all fairly standard stuff, although it takes up a lot of ‘mental bandwidth’ to keep all of those things going – so any upset to that (say, your union going on strike for several weeks in the middle of the year) can really throw a spanner in the works. Anyway, I’m feeling a bit more settled (although no less busy) after the summer, and so I hope to get back into things, including giving this blog a bit more TLC. Watch this space…

I recently started teaching a new module on printing and books in early modern Europe – my dream module. This is a one-semester module taught through 11 two-hour long seminars, and the module includes sessions in Special Collections at the Brotherton library, and visits to the Leeds Library and to the Centre for the Comparative History of Print/School of English Print Room. As part of the preparation, I had to get together a bibliography, and – acknowledging that my knowledge is weighted towards France and the sixteenth century – I turned to Twitter for help. And as I have so often found, the #twitterstorians did not let me down. I promised I would make that bibliography public – well, four weeks into term, I’ve finally got round to it.

END_OF_DOCUMENT_TOKEN_TO_BE_REPLACED

I am a massive fan of BBC Radio 4’s In Our Time programme. The range of subjects covered is truly mind-boggling, and the BBC has been really great at archiving the series over time: the website is an absolute treasure trove, and I love that you can search by period as well as by topic. The programme makers assume a certain level of engagement on the part of the listener, so you rarely find yourself feeling talked down to. I’ve learned a lot about subjects I’d never assumed I’d be interested in, all because they appeared to me in the form of an IOT podcast. Also, I always seem to have a commute of about 40 minutes, so a single episode enlivens my morning journey – but then I know other people who listen to it whilst cooking, baking and ironing. It’s a really handy way to get to know an unfamiliar subject – or to get really riled about what’s been left out of the discussion of a familiar subject, I suppose!

For newcomers, the format is simple – the host Melvyn Bragg leads a discussion on a given topic with three experts for 40 minutes, broadcast live on Thursday mornings. For the history/religion/literature/culture ones, this usually takes the form of a bit of background to the topic, discussion of the key aspects relating to the person/event/work at hand, and then a brief discussion of impact and legacy. Recently, subscribers to the podcast sometimes get a bonus discussion of a few minutes, after the live broadcast has ended, where the experts are asked about the things that didn’t get covered.

For scholars and students, it’s certainly not perfect – 40 minutes is not very long to get into something, it’s even shorter than the length of a standard lecture, and so things necessarily get truncated or edged out. Understandably, there’s a bit of a tendency to go for established names when in some instances there are other (younger, less well-known?) scholars working more obviously on the topic in question. But it does allow for discussion between the contributors (which tends to be robust rather than heated) and so it gives at least a general impression of how academic debates unfold.

I’d love to know more about how the topics are chosen – I’m not surprised at the focus on English material, and to be be fair, there seems to be a pretty good effort to consider non-Eurocentric topics in recent series. But pretty much nothing on seventeenth century France? No Louis XIV? No Thirty Years War  -although that could come back to the ‘what can you reasonably do in 40 minutes’ issue.

Also, there’s little chance for the contributors to explain what their knowledge is based on – that becomes problematic for students wanting to use In Our Time broadcasts when writing essays and dissertations. There’s no easy way to footnote the content of a podcast. However the supporting website has begun to provide a reading list so people can follow up the issues raised in the programme, and there are now links to the contributors’ web pages.

For the interested amateur, or someone wanting to refresh their memory, or just feel productive on their morning commute, it’s hard to beat In Our Time. Thankfully, the early modern has been pretty well-served over the years: find a selection of In Our Time episodes that will interest scholars and students of early modern France, Britain and Europe after the jump. Let me know if I’ve overlooked any of your favourites, if you’re a big IOT fan, and if there are similar kinds of broadcast that you’d recommend.

END_OF_DOCUMENT_TOKEN_TO_BE_REPLACED

Students are often wary about studying early modern France, particularly when it comes to research projects and dissertations, because they’re concerned that there’s not enough source material to go on. That’s simply not the case! I’ll be presenting various sources available in English over the next few posts.*

I’ll start with sources that help us to understand the politics and government of early modern France.

END_OF_DOCUMENT_TOKEN_TO_BE_REPLACED

There’s a new drama about Louis XIV coming soon to BBC2. First screened last year in France – although it’s all in English, and a lot of the cast are British , which may have raised a few eyebrows en France – Versailles focuses on Louis’s reign from the mid-late 1660s to the early 1670s. You can also expect some complimentary programming about life in early modern France.

There’s a brief taster of the drama here.